The founder of the company Jari Latvala started the business after his military service at the end of 1970’s by buying himself a combine harvester and by starting to work with it for farmers. A bit later he bought an excavator and started to work for private households and companies.

Jari became interested in buying and selling, partly due to his rally career which is why he founded Konemyynti Jari Latvala Ltd. in April 1983. At that time the company’s longest working employee, Aulis Moisio, came to the firm. We rented a warehouse from Toysa municipality where two employees fixed excavators, tractors and combine harvesters. Jari sold and delivered the machines to the customers himself.

The business got larger and the warehouse started to be too small which made us build a new one in Tuuri at 1987. We had such a large storage of combine harvesters now that we had to change the name to Konemyynti- ja purkaamo Jari Latvala Ky (limited partnership company). At the same time we were selling more and more.

We were one of the first to turn our eyes to European market. For a few years we had imported car parts and chassis from Germany because compared to Finland they were much cheaper there. At first we imported used combine harvesters then new combine harvesters and parts. While our business got larger we started to import also used excavators. In the mid 90’s we started to import used wheel loaders and dump trucks which still are our main selling line along with new wheel loaders.

In 1994 we started a new line of business, an Ltd. That’s because the sales was so good. In 1996 we bought our biggest rival in combine harvester market. We almost got a monopoly at the market and we became definitely the biggest company selling combine harvesters and their parts in Finland. Furthermore we expanded our selling of wheel loaders and excavator parts.

Spring 2005 we bought storage of tractor parts and accessories plus lots of hydraulic appliances. A few months we operated in rented location but at the beginning of September 2005 we moved to a new location at Korventie 2 which is situated in Tuuri.

We have a lot in Tuuri where there are four warehouses, a repair shop, a vehicle wash, a paint shop, a store, a rally team and offices. In the new buildings there is a possibility to sandblast and paint the machines bought to be re-sold. We can also put some extra equipment into the machines such as quick couplings, central greasing systems and extra hydraulics.

Transport and working with excavators has also been a part of our business ever since the beginning. We have 12 trucks working in Tuuri or Helsinki area plus dumppers and wheel loaders at different construction sites.

On June 2007 our company name was changed into Latvala Group Ltd. which is the head company and has three subsidiaries called Latvala Logistics Ltd., Latvala Motorsport Ltd. and Latvala Rent Ltd.

On October 2011 we sold spare part shop business in Korventie to E-P:n Koneosat Ltd. At the same time we added machine equipment (trcuks and wheel loaders) to sites in Southern Finland.

At the beginning of 2013 E-P:n Koneosat Ltd moved spare part sales away from Korventie and Helena got brilliant idea. Hall was reorganized as rally car, tractor, moped and motorcycle museum, cafe and fan merchandise shop.

At the end of 2014 bought this premise and both Latvala Group Ltd and Latvala Motorsport Ltd became tenants. After this Jari-Matti has expanded the hall with two different projects at 2016 and 2019. Today also Jari-Matti’s own company JML-Sports Ltd operates in this premise.

In 2017  Group Ltd built new hall for spare parts and machines for sales to Tuurintie 277. 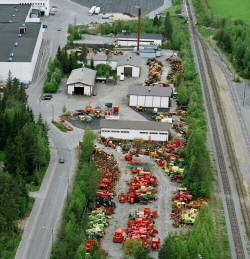